This is part 42 of a series of articles featuring the book Beyond Connecting the Dots, Modeling for Meaningful Results.

Assuming the design of the model and its implementation are correct, the modeler must still transfer confidence in the model’s results to its audience. This can be done in several different ways.

The first way is to demonstrate that the model generates expected results for normal inputs. For instance, if you modeled a reservoir, you would expect the volume of the reservoir to decline during the summer due to evaporation if no more water flowed into it. You can also test extreme scenarios and show that they generate the expected results. For example, if your reservoir were empty, you would expect the amount of water evaporating from it to be zero. By enumerating these standard cases and showing that the model results match the expected results you can help build confidence in the model.

Often these expected results can be described in terms of a curve showing how the values of one of the stocks (or variables) in the system is expected to change over time. This curve can be taken from historical data (a reference behavior pattern), or simply drawn on a piece of paper by experts familiar with the system (an excepted behavior pattern).

Possibly the most persuasive action to convince an audience of the effectiveness of a model is to forecast the future and then show this forecast to be correct. This, of course, is difficult to do in practice for several reasons. Depending on the scale of a model, it could take several years or decades to generate data to test the model. Additionally, we must remember that most narrative models are poor predictors and should not be used for predictive purposes solely.

Sensitivity testing is a broad field that has the potential to address many questions and doubts that may arise about a model. In general, the variables and numeric configuration values in a model will never be known with complete certainty. When the results from an election poll are published, the pollsters publish not only their predictions but also the uncertainty in the prediction (e.g., “the Democratic candidate will obtain 52% ± 3% of the vote”). Similarly, when a building is constructed, the materials used will have certain properties – such as strength – that again are only known up to some error or tolerance. The engineer and contractor are responsible for ensuring that the materials are sufficient even given the uncertainty of their exact strengths.

The same occurs when modeling. The modeler will have to estimate most primitive values, along with associated errors. Of course the error will also be propagated through the model when it is simulated, and will affect the results generated by the model. This error is one factor that can create doubt about a model and reduce an audience’s level of confidence.

As a modeler, one approach to address doubt would be to try to measure all the model’s variables with great accuracy. You could search the available literature, undertake a meta-analysis of current results, carry out new experiments, and survey experts to get as precise a set of parameter values as possible. If you were able to say with strong certainty that these values were so accurate and the errors so small that their effect on the results is negligible, then that would be one way of addressing the issue of uncertainty.

However, all of this is often impossible to do. When dealing with complex systems it is almost always the case that at least a couple variable values will never be known fully with certainty. No matter how much research you do or how many experiments you perform, you will never be able to pin down the precise values of these variables. How do we handle these cases?

Uncertainty can be explicitly integrated into a model by replacing constant primitive values with a construct that represents the uncertainty in that value. Imagine you had a simple population model of rabbits in a cage. You want to know how many rabbits you will have after two years. However, you don’t know how many rabbits there are in the cage initially. You have been told that there are probably 12 rabbits, but the true number could range anywhere from 6 to 18.

If you run this stochastic model many times, you obtain a range of results. These results can be automatically aggregated to show the range of outputs. For instance, if you ran the model 100 times you could see what the maximum and minimum final populations were. This would give you a good feeling for how many rabbits you needed to prepare for after two years. In addition to the maximum and minimum you might be interested in the average of these 100 runs: the expected number of rabbits you would see. You could also plot the distribution of the final population sizes using a histogram to see how the results are distributed. This distribution would show how sensitive the outputs are to the uncertainty in the inputs: a form of sensitivity testing.

Four key distributions are useful for specifying the uncertainty in a variable:

An important practical tip when using sensitivity testing within the System Dynamics context is to be careful about specifying random numbers within variables. The value of a variable is recalculated each time step. This means that if you have a random number function in the variable, a new random value will be chosen each time step. This can create a problem if the random value is supposed to be fixed across the course of the simulation. For instance, we may not know the birth rate coefficient for our rabbit population, but, whatever it is, we assume it is fixed over the simulation.

A simple way to handle these fixed variable values would be to replace the variables with stocks. The initial value for the stocks could be set to the random value; it would only be evaluated once at the beginning of the simulation and kept fixed thereafter. Though very workable, this approach violates the fundamental metaphors at the heart of System Dynamics. In Insight Maker, another approach is to use the Fix() function. When used with one argument, this function evaluates whatever argument is passed to it a single time, and then returns the results of that initial calculation for subsequent time steps. So instead of having the simple equation Rand(0, 10) in a variable to generate a random number between 0 and 10, you could place Fix(Rand(0, 10)) in the variable. The first equation would generate a new random number each time step; the second equation will generate one random number and keep it constant throughout the simulation.

This model helps you explore the usage of sensitivity testing in practice. 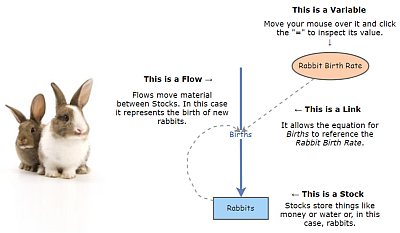 The astute reader will notice that our discussion up to this has failed to address an important point: how do we determine the uncertainty of a variable? It is very easy to say that we do not know the precise value of a variable, but it is much more difficult to define the uncertainty of it. One case where we can precisely define uncertainty is when we take a random sample of measurements. For instance, suppose our model included the height of the average American man as a variable. We could randomly select a hundred men and measure their heights. In this case our uncertainty would be normally distributed with a mean equal to the mean of our sample of one hundred men and a standard deviation equal to the standard error of our sample of one hundred men1. For any random sample of n values from a population, the same should hold true: you will be able to model your uncertainty using a normal distribution with:

However, in most applied cases you will not be able to apply this normality assumption. Generally you will not have a nice random sample, or you might have no data at all and instead have some abstract variable for which you need to specify a value. In these cases, it is up to you to make a judgment call on the uncertainty. Choose one of the four distributions detailed above and use the expert knowledge available to you to place an estimate on the parameterization of uncertainty. One rule of thumb: it is better to overestimate uncertainty than underestimate it. It is better to err on the side of overestimating your lack of knowledge than it is to obtain undue confidence in model results due to an underestimation of uncertainty.

Next edition: Building Confidence in Models: Confidence and Philosophy.