It’s a universal practice: the people who write the articles, blog posts, and other information resources that make up the websites across the world wide web include in their work hyperlinks to other useful and relevant resources. A primary aim of this hyperlinking is assist readers with their knowledge acquisition and learning, so you’ll see plenty of it here in the pages of RealKM Magazine.

But in the back of my mind has always been this question: could hyperlinking potentially infringe copyright, in particular if the website being linked contains information that might be in breach of copyright?

A judgement1 handed down in the European Court of Justice on 8 September 2016 has found that, in particular circumstances, hyperlinking can indeed constitute a breach of copyright. The court ruled that:

Article 3(1) of Directive 2001/29/EC of the European Parliament and of the Council of 22 May 2001 on the harmonisation of certain aspects of copyright and related rights in the information society must be interpreted as meaning that, in order to establish whether the fact of posting, on a website, hyperlinks to protected works, which are freely available on another website without the consent of the copyright holder, constitutes a ‘communication to the public’ within the meaning of that provision, it is to be determined whether those links are provided without the pursuit of financial gain by a person who did not know or could not reasonably have known the illegal nature of the publication of those works on that other website or whether, on the contrary, those links are provided for such a purpose, a situation in which that knowledge must be presumed.

The ruling follows a related ruling in the same court in 2012. It applies to people operating websites in Europe, and establishes a precedent that could be applied in other jurisdictions.

The ruling is understandably causing significant concern, with a number of commentators saying that it constitutes a significant threat to the internet. However, not everyone is so alarmed.

Outspoken European Parliament member Julia Reda argues that the European Court of Justice ruling “sets a dangerous precedent and establishes an onerous burden on anyone running a website in Europe.” She warns that the ruling is also the thin end of the wedge, with the European Commission planning to introduce further copyright restrictions. Reda has made copyright reform the focus of her legislative term. The reforms she is advocating include relaxing the current copyright regime to facilitate enhanced knowledge transfer and sharing.

On the other hand, Charles Oppenheim states that while the ruling is archaic and goes against the ethos of the web, people who aren’t linking to obviously infringing sites will be unaffected by it. Based on the work of Eleonara Rosati as a result of the 2012 and 2016 rulings, he provides a table showing the circumstances in which hyperlinks can be provided without infringing copyright (Figure 1).

The columns in the table in Figure 1 are defined as follows:

The first column, accessibility, refers to whether one can get access to the linked content at no charge, i.e., is it on a web site without paywall or other barriers? The second refers to whether the content in the website being linked to infringes copyright. For example, a website containing unauthorised reproductions of documents would be considered to have infringing content. Of course, in some cases, a website contains a mixture of infringing and non-infringing content. In such cases, one has to consider the two types of content separately in the Table. The third column refers to the commercial activity of the person or organisation providing the link; it is nothing to do with the commercial or otherwise activities of the site being linked to. The fourth column asks the question is the person creating the link aware that the material in the site they are linking to is, or is likely to be, infringing? As noted in the Table, in some cases, both this question, and the question of commercial activity of the person doing the linking, is irrelevant to the final outcome. The final column confirms whether the proposed linking is lawful or not (though there are special circumstances noted by the Court and not discussed further here that may affect this column). If it is not, then a licence should be sought from the owner of the web site being linked to, or from someone acting on the owner’s behalf; either that, or don’t include the link!

However, in arguing that people who aren’t linking to obviously infringing sites will be unaffected by the ruling, Oppenheim gives the example of Sci-Hub. While Sci-Hub provides access to “unathorised reproductions of scholarly articles”, it exists only because the information it makes accessible is normally locked away from public view behind academic journal paywalls.

I argue that it is inappropriate to consider hyperlinks to a site such as Sci-Hub a copyright infringement while the issue of public open access to research information remains such a big problem. On this basis, I share Julia Reda’s concerns about the ruling.

Header image source: Copyright Symbols by Mike Seyfang is licensed by CC BY 2.0. 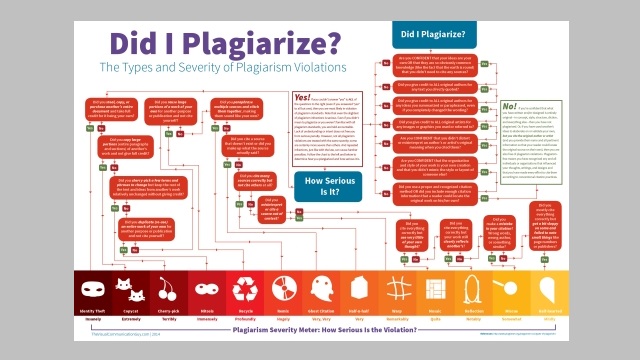 Infographics: “Did I Plagiarize?” and “Can I Use That Picture?”