Earlier this week, David Griffiths, the founder of UK-based knowledge management consulting company K3-Cubed, wrote a blog post strongly critical of the draft standard and its development process. The post was also shared on Facebook by Dave Snowden, who said that he endorses most of what David says.

I am bitterly disappointed that so called Knowledge Management experts can so flagrantly constrain the future of the field by ignoring fundamental challenges facing the future of organisations.

Furthermore, the whole ISO Knowledge Management process stinks of jobs for the boys (and girls), who, I argue, are more interested in protecting their consultancy practice than developing standards that anticipate the future of people, organisations and wider society in the context of the Fourth Industrial Revolution (workplace 4.0).

This KM ISO standards process is seemingly dominated by consultants, where the process seems incestuous and focused on protecting legacy services delivered by various historic KM consultancy companies formed in the early days of KM.

I also agree with much of what David says.

The ISO standards development process runs completely counter to everything I’ve learned about open collaborative policy and strategy development through many years of working with diverse communities. The KM standard development process should have been fully open from day one, so that it could encompass the greatest diversity of views and expertise.

As well as facilitating consideration of the widest range of views, a fully open process allows people to feel that they’ve been given the best possible opportunity to have their say, rather than excluded from the process. The people involved in an open process will also feel a sense of ownership over the outcomes, making them much more likely to support implementation.

It’s actually rather oxymoronic that the development process for an important knowledge management standard has not involved the widest diversity of relevant knowledge.

It’s not just the KM standard that has been the target of the types of criticisms raised by David. For example, Christopher Paris, who is one of the Managers of the LinkedIn ISO 9001 group, has leveled similar criticisms at the ISO 9001 development process.

​Play the ball, and not the man (or woman)

The aspect of David’s post that I’m not comfortable with is his direct criticism of a number of the KM professionals involved in the development of the draft standard. I know some of the people mentioned – Patrick Lambe, Arthur Shelley, and Paul Corney – and although I’ve never interacted with Ron Young, his expertise and reputation saw him recently deliver the keynote presentation at #KMELB2017, which this magazine’s host organisation KnowQuestion co-sponsored.

At least one of these KM professionals has also clearly held the view that the KM standard development process should have been more open. In a message in the ActKM Forum in March this year, Arthur Shelley states that:

I would love to share the draft now, but SA [Standards Australia] processes prevent public circulation of drafts until the official “Public draft” is available. I look forward to sharing more as soon as this is possible.

I’m in no doubt that these KM professionals would have approached the KM standard development process with good will and integrity, and not with the aim of protecting their own interests, or to create “Jobs for the boys (and girls)”.

When we involve humans in processes, we can’t expect things to be any other way. If a particular process ends up biased, then we need to look at the design and conduct of the process, and not at how particular people have approached the process.

The preparatory step of the KM standard development life cycle should have commenced with an open call for input into the scope and coverage of the standard, and then the process should have stayed open from then on.

Open processes are now being embraced in a wide range of fields including research, education, innovation, software development, and data management. ISO needs to move with the times and do the same. Yes, developing standards in the open may challenge the current ISO standards sales revenue model, but if an alternative model needs to be found to allow for open standards development, then so be it. This could be beneficial anyway because the cost of purchasing standards means that many people who could benefit from them never access them.

Can the KM community unite behind the new standard?

I think it can, but I don’t think we can expect this to happen if the response is to just say that people should air their views through comments on the draft standard on the BSI website. That won’t be enough for the people who currently feel that the process has ignored the full range of views.

I’ve successfully saved a number of processes that others had made a mess of, but never without changes to the process.

Comments on the draft are still important, but in addition to that, the ISO/TC 260 Technical Committee that is responsible for the KM standard needs to convene online and/or face-to-face forums to facilitate open discussion on the draft, and then needs to be committed to fully considering the results of these discussions when revising the draft.

Despite the flawed development process, I still think that the KM standard is very timely and, as Ron Young argues, vitally important to the future of the KM profession. I encourage the ISO/TC 260 Technical Committee to step up and carry out the necessary actions to ensure that all KM professionals can unite behind the KM standard. 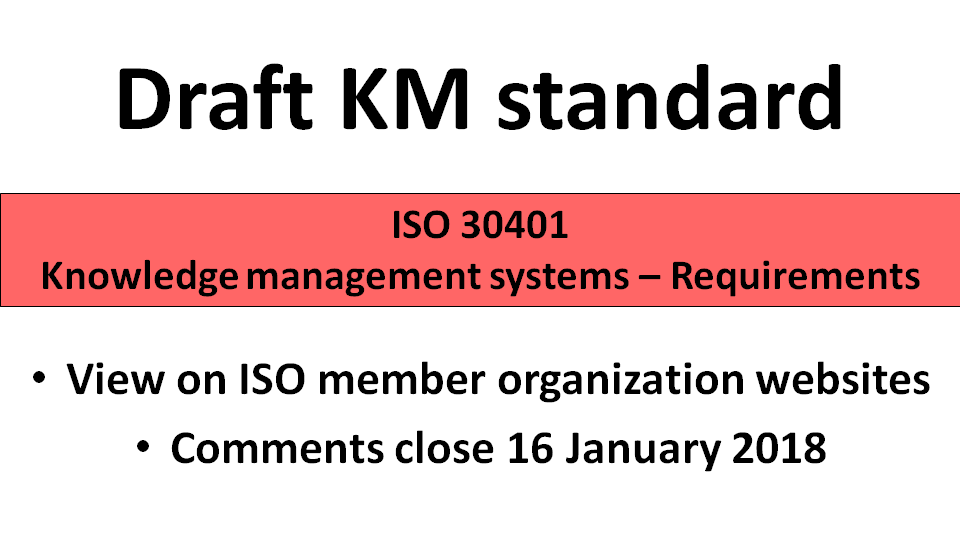 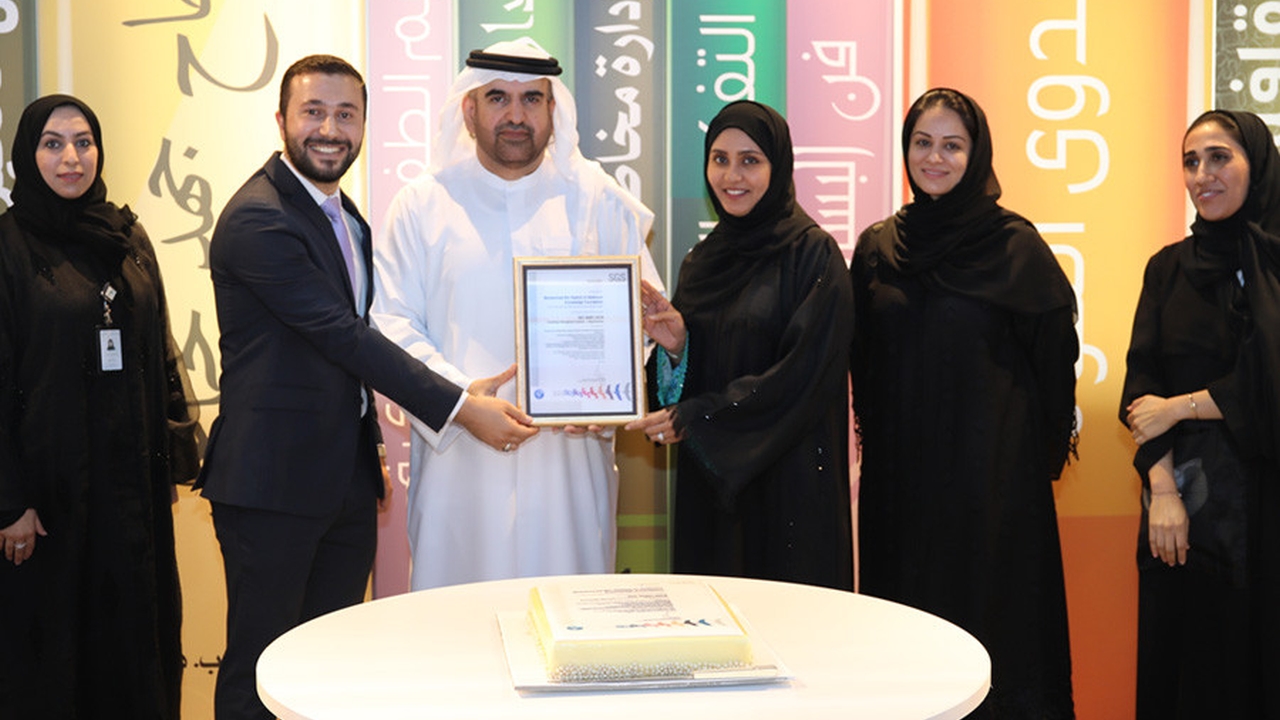 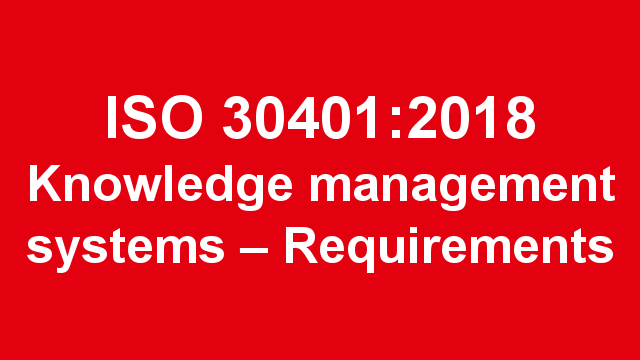 Evaluating ISO 30401 standard: Part 3 – What are the mandatory requirements? 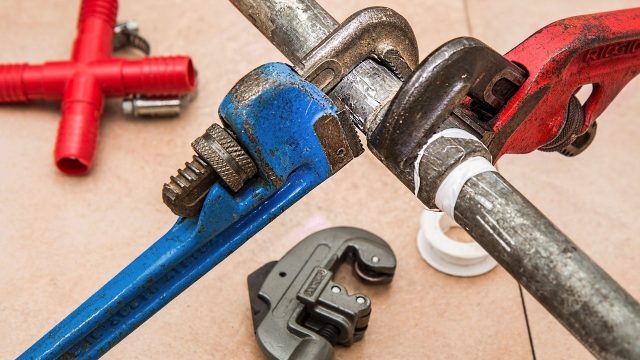 A plumber or a handyperson?