In the first part of this two-part series, I expressed concern about the article Knowledge Management in China, and in particular the claim in the article that “There are real cultural barriers in the Chinese culture [to knowledge management (KM)].”

I concluded that first part with the advice that while national-level cultural characteristics can assist you in understanding the cultural differences you can expect when working in a different country and how to respond to them, they are only just one part of the picture. And these cultural differences are certainly not an impediment to KM.

In this second part I follow up with some specific suggestions that can help to facilitate the successful adoption of KM initiatives in other cultures.

First, accept that your KM practices might be WEIRD

A foundational assumption of psychology is that there are “psychological universals”, which are core mental attributes common across all human cultures. A 2005 paper1 advises that on the basis of the assumed existence of these universals, “interventions [are] designed to solve social and psychological problems in other cultures.” However, the paper reveals that universals have been a neglected area of psychological research, and warns that:

… it is important to place any social interventions into the affairs of other cultures on firm ground that is based on clear knowledge of universals and their boundary conditions as well as the particular prerogatives and psychological preferences of those cultures that may differ considerably from one’s own. This is not a call for unbridled cultural relativism but … a call to be slow to judge other cultures.

A startling 2010 paper2 then seriously calls into question the assumption that there is little variation across human populations, alerting that broad claims about human psychology and behavior in the world’s top journals are based on samples drawn entirely from Western, Educated, Industrialized, Rich, and Democratic (WEIRD) societies:

… our review of the comparative database from across the behavioral sciences suggests both that there is substantial variability in experimental results across populations and that WEIRD subjects are particularly unusual compared with the rest of the species – frequent outliers. The domains reviewed include visual perception, fairness, cooperation, spatial reasoning, categorization and inferential induction, moral reasoning, reasoning styles, self-concepts and related motivations, and the heritability of IQ. The findings suggest that members of WEIRD societies, including young children, are among the least representative populations one could find for generalizing about humans. Many of these findings involve domains that are associated with fundamental aspects of psychology, motivation, and behavior – hence, there are no obvious a priori grounds for claiming that a particular behavioral phenomenon is universal based on sampling from a single subpopulation.

While some other researchers have disputed3 the study, there has been an overwhelming groundswell of support for the findings.

So, while your KM practices might work well in WEIRD societies, these societies “are among the least representative populations one could find for generalizing about humans.” This means that rather than there being “real cultural barriers [to KM] in the Chinese [or any other] culture”, there are potentially real and significant cultural biases in many current KM practices, and at least some of these practices won’t be readily transferable to other cultures.

Then, consider how you can facilitate the successful transfer of KM practices

Advice on how to successfully transfer your KM practices to another culture comes from Pamela Hinds, professor in management science and engineering at Stanford University, in an article in Harvard Business Review. Hinds reinforces the WEIRD study findings, writing that best practices are optimized for a particular place and time and don’t necessarily transfer to another cultural context.

She reports on insights gained from three studies to which she has contributed, and from these insights, offers the following suggestions:

Postscript: Since the publication of this article series, an article has been published in The Conversation echoing the issues I have raised.

Header image source: Adapted from Nyaya Health: Community Health by Possible, which is licensed by CC BY 2.0. 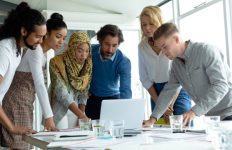