A mixed year for evidence-based thinking and decision-making

It’s vital that the knowledge we create, share, use, and manage is factual and evidence-based. However, in 2016 we’ve seen growing concern about the spread of misinformation and fake news, particularly online, and claims of the emergence of a post-truth era.

The Oxford Dictionaries Word of the Year for 2016 is “post-truth”, defined as “relating to or denoting circumstances in which objective facts are less influential in shaping public opinion than appeals to emotion and personal belief”. The term only came into widespread use in the past year, spiking at the time of the June Brexit referendum and even more so in the lead-up to and during the November United States presidential election.

It would be easy to conclude that we are entering very dark times indeed. But this overlooks the fact that in 2016 we’ve also continued to see growing public interest in science, particularly online.

In 2016, the average monthly on-site readership of academic news and views website The Conversation grew from 2.7 million to 3.8 millions users. The Conversation’s 2016 Stakeholder Report also shows that it now has a reach of 35 million through republication, editorial teams in five countries and over 43,000 registered researchers and academics. Other science websites and social media feeds have also become very popular, for example each ScienceAlert post receives a large number of shares.

At the same time that pseudoscience-embracing Donald Trump was elected as president of the United States, Barack Obama published the very first academic paper1 by a sitting United States president. Obama’s paper tops Altmetric’s list of the top 100 most-discussed journal articles of 2016.

In 2016, we’ve also started to see an increased awareness and understanding of the big problems in science and what should be done about them, as can be seen in the RealKM Quality of science and science communication series of articles.

While I question the notion of our entry into a “post-truth” era, the rise of fake news and the election of a pseudoscience-embracing United States president are serious concerns. What will 2017 bring?

Throughout 2016, RealKM Magazine has published a wide range of articles on knowledge management (KM) and related disciplines including communications, psychology, sociology, and management research.

Our most popular article, David Williams’ Components of a knowledge management system, now has over 3,500 views.

I presented a range of articles discussing the findings of recent KM research, including:

Our fascinating new Systems thinking and modelling series commenced this month. This innovative series uses interactive models to establish a far better and enduring basis for mastering systems and feedback.

Sally Chik continued her outstanding insights into a wide range of KM-related topics with these articles:

The articles I presented included:

Throughout 2016, articles introducing new research findings have been added to the ongoing ad hoc series KM in small and medium enterprises (SMEs) and KM in the construction industry.

We’ve also featured articles profiling a range of significant knowledge and information management initiatives established or advanced in 2016, including policy development initiatives. These initiatives include:

The year culminated in the launch of RealKM Connect, a strategic knowledge management forum commencing in Melbourne in 2017. The RealKM Connect workshops will provide hands-on professional development for people who want to take their KM skills to the next level.

Each workshop will include information on the scientific theories and evidence behind each topic covered, as well as challenges to help participants put what they learn into practice when they return to their organisation.

Knowledge management in 2019: the year in review→ 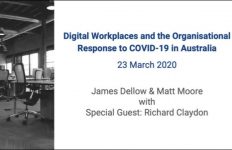 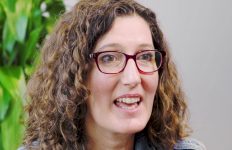