Editor’s note: In the article Case Study: How to overcome resistance and denial when engaging stakeholders I discuss how projects or initiatives are often seen to be one-dimensional and linear, when in reality they are multi-layered with complex interactions and inter-dependencies between the layers. The article below provides insights into why people see the world as simple when in reality it is complex, and alerts to the consequences of this.

Ants are simple creatures. They live by simple rules: if you see a scrap of food, pick it up; if you see a pile of food, drop the food you are carrying. Out of such simple behaviour, an ant colony emerges.

We humans are like the ants. For all our sophistication, we react to the world in simple ways. Our world is complex, but our ability to cope with it is limited. We seek simple solutions that hide or ignore the complexity.

The result is that our actions often have unintended side-effects. These produce unwelcome trends, accidents and disasters.

Our senses are constantly bombarded with far more data than our brains can process. Our sensory systems filter it, extracting features, such as movement, that we need to make sense of our surroundings.

The limits of short-term memory further increase the need to simplify. The psychologist George Miller found that short-term memory can process only a few chunks of information at a time (the so-called “seven-plus-or-minus two” rule).

Given a string of random letters, you might recall just seven at a time, but if the letters form identifiable chunks, such as words or phrases, then you can remember longer strings of text.

Our brains cope with complexity by identifying important features and filtering out unnecessary detail. On seeing that the space you enter has four walls, a floor and a ceiling, you know you have entered a room and can usually ignore the details. This is an example of what the French psychologist Jean Piaget termed a “schema”, a mental recipe we learn for responding to common situations.

As individuals, we deal with complexity in our lives by removing or hiding it. Our mental schemas are one way of doing that. Habits are another.

We also simplify complex decision-making by using received wisdom. This includes following simple rules of thumb (“a stitch in time”), following the advice of people we respect or trust, and conforming to the beliefs and attitudes of whatever group we belong to.

Society has many ways of managing complexity. Commonly seen is the “divide and rule” approach to management, which leads to hierarchical division of large organisations.

Another is to use constraints, such as laws, road rules and commercial standards, all of which limit the potential for harmful interactions to occur. The design of a home simplifies living space by dividing it into separate rooms for sleeping, eating and other activities.

Simplicity is a virtue, so long as the world around us behaves in the way we expect. However, our world is complex, even more so than any way we represent it, either in our mental models, or even in scientific models.

Influences omitted from consideration can cause a model to fail, especially when conditions change. A simple example is failing to put personal items – say, your keys – in their usual place.

Your “model” of where the keys should be fails and you face a long hunt to find them. Changed conditions also underlie most accidents. The history of aviation shows that despite its increasing safety, unexpected conditions continue to surface and lead to disaster.

New technologies are usually introduced to simplify our lives, but inevitably they have unexpected side effects on society. For instance, the introduction of labour-saving devices into the home set off cascades of social changes, such as the decline of the nuclear family.

It makes life simpler to rely on others to provide solutions to complex problems. We assume that mentors, experts or political leaders have answers to society’s problems.

However, their models are just as susceptible as anyone’s. A study by Philip Tetlock showed that experts who base predictions on sweeping, general ideas, such as political ideologies, are usually the best known, most influential and most widely trusted; they are also the ones who are most often wrong.

Our inability to fathom complexity leads to a belief that any worthwhile solution to a situation must be simple. This attitude perhaps explains the widespread mistrust of science today: it has become too complex and technical for the public to understand. So people often ignore or reject its messages, especially when its findings are unpalatable.

Any change introduces complexity into people’s lives. Rather than face issues that are complex, some people retreat into denial, preferring to believe in a simpler future in which there is no change and their lives can go on as they always have.

The world today is undergoing rapid change. Economic growth, environmental threats and the explosion of new technologies are enormously complex and threaten social upheaval. Brexit, the US election result, and climate change denial all appear to have roots in the desire for simplicity.

In an era of post-truth and pseudoscience, what can you do? More than ever, avoid following simple slogans uncritically. Avoid dismissing uncomfortable facts out of hand (confirmation bias).

Above all, remember that complexity arises from the richness of interconnections between things. To ignore the wider context, to fail to consider the side effects of actions and ideas, is to do so at our peril.

Header image source: Tired Man Sitting on Bed by Mic445 is licensed by CC BY 2.0. 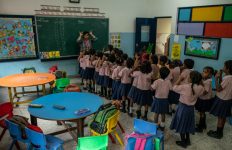 The importance of knowing how: A pluralistic and integrated approach to action-oriented knowledge for sustainability→

Taking responsibility for complexity (section 3.3.2): Focusing on how change happens→